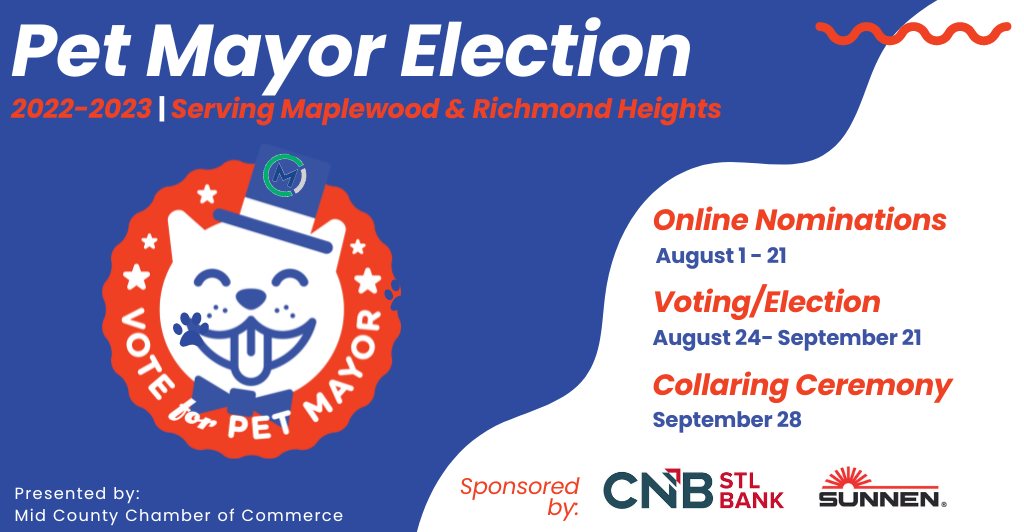 The 2022-2023 Pet Mayor will serve as an ambassador of goodwill for Maplewood and Richmond Heights for a period of one year. Any and all pets are welcome run for this prestigious honor- dogs, cats, pigs, hamsters, goldfish, etc.

VOTING INFORMATION Much likeUnlike human elections, the Pet Mayor election can and will be bought. All proceeds benefit the Mid County Chamber of Commerce.

Voting can be cast online at $1/vote from August 24-September 21. (Minimum $10 to vote. Votes cannot be split between candidates)

Pet Eligibility Eligible nominees must meet one of the following criteria

Sponsored by a Chamber Member Business-(Businesses may sponsor up to 2 pets) Who is a Member of the Chamber?

IMPORTANT NOTE- If being sponsored by a member business, the name of the member business and the person who authorized on behalf of the business, must appear on the entry. A staff member will verify approval with the member. No refunds will be given to submissions found to be ineligible to serve.

Be an upstanding and respectable pet in the community

Represent their constituents equally regardless of breed, species, and/or known tricks

Be a fierce advocate for small businesses

Have a good temperament (as should their human spokesperson)